She’s one of the top 25 most influential people in DRTV, according to Response Magazine. She’s a pioneer in the industry and, in 1986, she co-founded Script to Screen along with her husband, Ken Kerry. Today, Script to Screen is one of the nation’s leading direct response television companies and has produced more than 600 infomercials and DRTV spots, plus generated more than $6 billion in sales for its clients.

“What I love about the direct response business is that you cannot run and you cannot hide from the reality of the market place,” Barbara says, “In a very short time, you discover if you will win or you will lose, unlike conventional advertising where you know 50% of your advertising dollar is wasted, you just don’t know which 50%. In DR, you know within hours if your media dollars are working or not.” Under Barbara’s guidance, Script to Screen has been honored with over 70 awards for excellence from the Clio Awards, Electronic Retailing Association, Jordan Whitney and the New York Festivals.

Barbara began her career in television producing programs for Southern California sports teams including the Angels, Dodgers, Lakers, Raiders, and Rams. Her education includes a B.A. in telecommunications from the University of Colorado, and an M.A. in psychology from Pepperdine University.

Barbara L. Kerry of Script To Screen: “Peaks and valleys are inevitable no matter how successful you are”

Thrive Global Peaks and valleys are inevitable no matter how successful you are. The economy and changes in technology are out of our control. Our primary medium for many years was television. When the social and digital age exploded our business took a big downturn...

The New Era Infomercial New Age of Advertising The new age of advertising, marked by advances in technology that have put every brand in direct contact with their consumer, has been called “the Wild West of Marketing.” The ubiquitous reach of digital media today is... 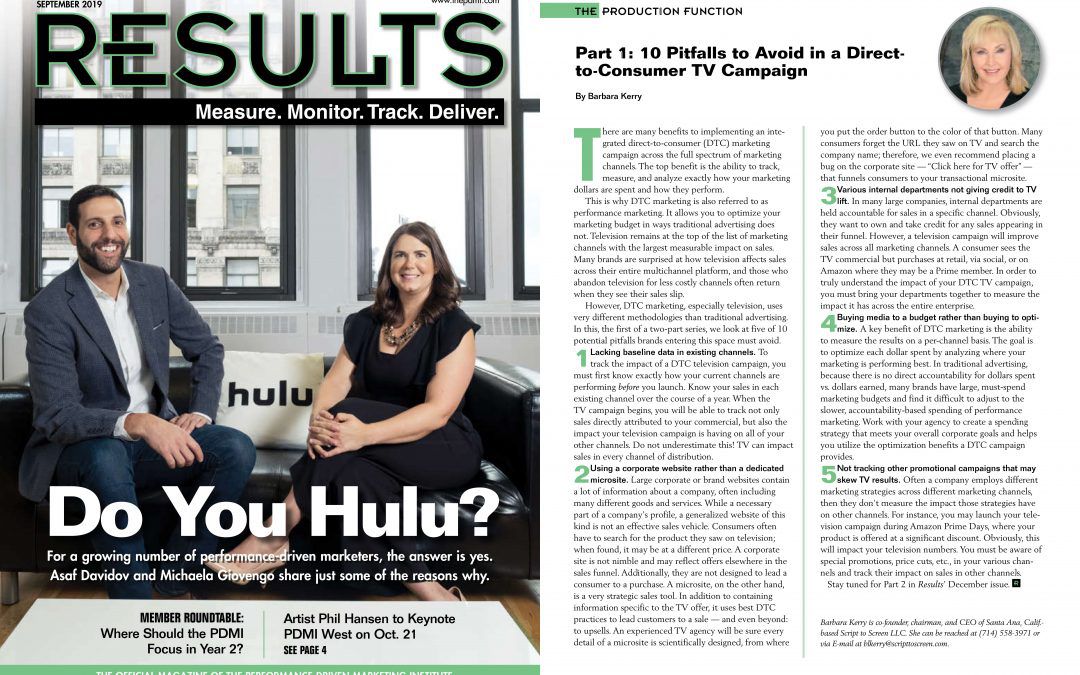 Part 1: 10 Pitfalls to Avoid in a Direct-to-Consumer TV Campaign

By Barbara Kerry There are many benefits to implementing an integrated direct-to-consumer (DTC) marketing campaign across the full spectrum of marketing channels. The top benefit is the ability to track, measure, and analyze exactly how your marketing dollars are...

A performance-driven marketing agency with 30 years of experience transforming companies, such as Bare Minerals, Shark/Ninja, Gwynnie Bee, and Nutrisystem, into best-selling brands.  While many big, legacy brands tend to stick with traditional advertising, other newer...
Previous »

SIGN UP FOR OUR EMAIL LIST SO YOU CAN
SEE THE WEBINAR AFTER IT AIRS AND STAY UP-TO-DATE ON ALL OUR FUTURE WEBINARS.

GET THE PROVEN SYSTEM WHICH HAS GENERATED BILLIONS IN SALES