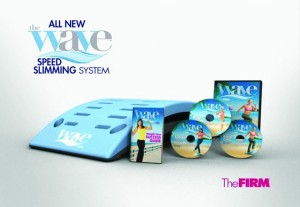 The mass-market brand TheFIRM has been in existence since 1979. It pioneered the combination of cardio and strength training in one workout, and is considered “America’s No. 1 exercise video series.”

The Wave by TheFIRM was the latest infomercial in this long running successful campaign. This infomercial was designed to introduce the Wave System via DRTV, to create an independent profit center, and to also build sell-in and pull-through demand in other channels of distribution, that include retail, catalog, internet and QVC. The infomercial tested successfully in 2008, and began a national rollout in 2009. It  reached as high as No. 18 on the Infomercial Monitoring Service (IMS) Report, and won the Jordan Whitney 2008 Award for Best Use of Testimonials. The Wave by TheFIRM infomercial was also honored with the award for Best Sports & Fitness Infomercial at the 2009 ERA D2C Convention in Las Vegas. Over the history of the campaign, TheFIRM sold well over 100 million videos.