Script to Screens Campaign for Cleva in Appliance & HVAC Report 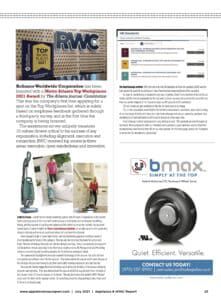 Script to Screen, a performance-driven marketing agency with 30 years of experience as the market leader assisting some of the most well-known products and brands, such as Amazon, SharkNinja, Keurig, and Nutrisystem, in building and optimizing their direct-to-consumer channel, has launched several spots of varied lengths for Cleva’s new Kenmore Intuition, an upright vacuum with a patented allergen seal bag and no-touch, push and release dirt-and dust-free disposal.

Cleva engaged Script to Screen due to their creative storytelling approach and track record of incomparable performance in the category. The new ads demonstrate the powerful suction and triple filtration technology that pulls dirt into the allergen seal bag. Cleva is successfully running both Full Break three-minute and Long-Form infomercial length versions. M2 Management and Marketing Services is overseeing and providing analytics for the television campaign rollout.

The commercials highlight the exclusive powerful technology of the vacuum that pulls dirt and dust quickly and without mess into the vacuum. They demonstrate the ease at which users dispose of the full bags without ever having to get their hands dirty or being exposed to any dust plumes.

The new ads feature happy Kenmore Intuition users touting the benefits of the vacuum including its power and lightness. They also demonstrate the ease at which the bag jettisons from the body of the vacuum when it’s time to dispose of the debris. The ads also feature the model’s HEPA filtration action and the fact that the vacuum allows for everything inside the disposal bag to stay inside until it’s time to be tossed away.